Walking into Barebuger on Court Street in Cobble Hill, you immediately know there is something different about this restaurant. Maybe it’s the reclaimed wood from floor to ceiling, the colorful decor on the walls or the light fixtures that look as though they came out of an artist’s studio. 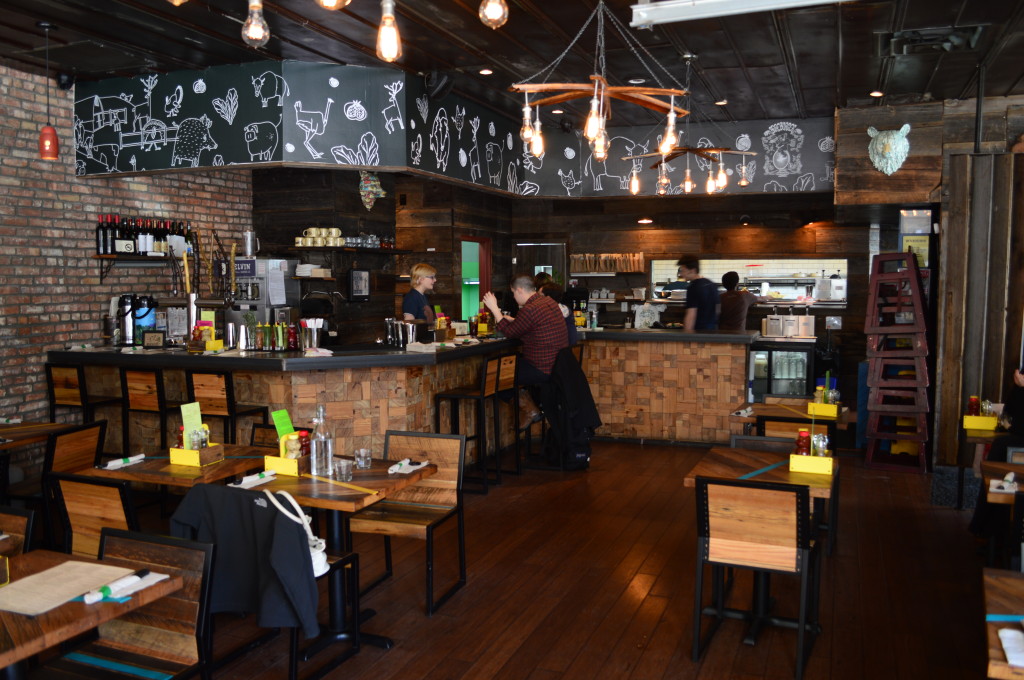 Or maybe, it’s the menu. Bareburger features meat from farms across the United States that is guaranteed organic. Sure, your standard beef burger is on the menu but there is also elk, ostrich and boar options for the more adventuresome diners.

Order one of the mouthwatering burgers off the menu or create your own – select your protein, favorite toppings, sauces and sides. You even get a chance to try your burger on a tapioca rice gluten-free bun.

Don’t worry vegan and vegetarian Brooklynites, you too have plenty of options at Bareburger. Get your burger with a farmers’ quinoa veggie patty, black bean patty or portabella mushroom. They also have a wide variety of salads if you’re in the mood for a little more green on your plate.

This Bareburger location also has a full service bar. Cocktails, beer (from local east coast breweries) and wine are served up alongside Kelvin Slushies. These slushies come either virgin or spiked, creating combinations such as strawberry dreamsicle and ginger margarita.

Once the springtime sunshine is a bit more prevalent, the bright yellow garage doors will open up to serve brunch, lunch, dinner and cocktails until closing time.  The kitchen stays open until 11pm on weekends.

The design of each restaurant in this micro-chain is unique but they all partner with local designers and builders to create an interesting feel within the space. The Cobble Hill location partnered with Uhuru Designs in Red Hook, which made all of the tables and chairs.

A few other cool facts about the interior space:

– The ceiling is made from reclaimed tin from a turn of the 20th century barn in Ohio
– The three chandeliers hanging from the ceiling were built using recycled materials by the father of one of Bareburger’s owners in his garage in Queens
– The bear heads (which differ in each Bareburger location) are made by an artisan in Austin, Texas

You don’t have to feel guilty if your eyes are a bit larger than your stomach at Bareburger. They compost all of their organic waste – food people don’t eat, leftovers from food preparation and some of their napkins and to-go containers.

On April 24th, Cobble Hill’s Bareburger is celebrating its first anniversary on Court Street. To celebrate, they are partnering with Sixpoint Brewery to create seasonal drink specials. Free kids food (or as they adorably call them, cubby meals) will be served from 11am-1pm on Thursday, April 24th and Saturday, April 26th.

“We really want to do something to thank the community,” says Bareburger Manager, Aristotle. “We’ve received so much generosity from the neighborhood and we hope to continue our relationship with them. We’re not just a restaurant, we’re a member of their community.”

So come in, grab an organic burger and a slushie and celebrate Bareburger’s first anniversary!