Skip to Content
Home Arts & Entertainment Williamsburg: How Do You Remake A Film That Never Existed? 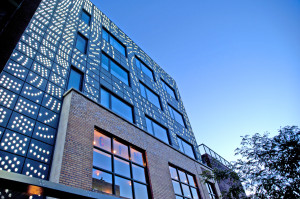 Rough Cut is debuting at Nitehawk Cinemas in Williamsburg. The debut feature of London-based director Jamie Shovlin, the film is a mixture of archetypal 1970s slasher movie and behind-the-scenes footage of the making of the film.

Shovlin created a full screenplay, score and trailer for Hiker Meat, the 70’s slasher film set at an upstate New York summer camp – drugs, sex and a murderous psychopath. You know, the norm.

What makes this showing unique is the film-within-a-film. Rough Cut is a mash up of Hiker Meat’s final cut as well as a unique look into the slasher genre and what went into creating the film. It pays affectionate homage to the filmmaking process.

The screening on June 5th at 7:30pm will also include a Skype Q&A with Shovlin from London.