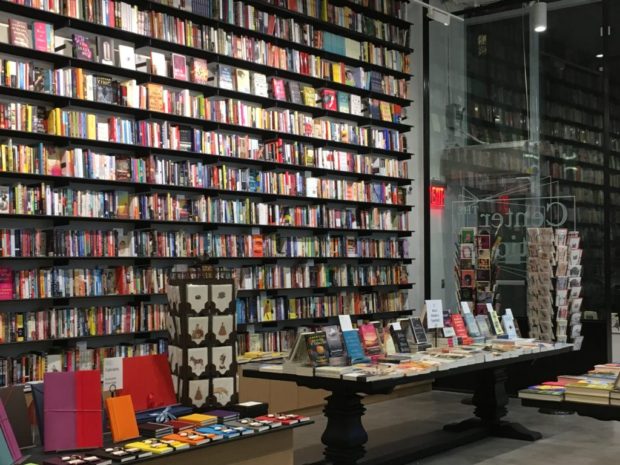 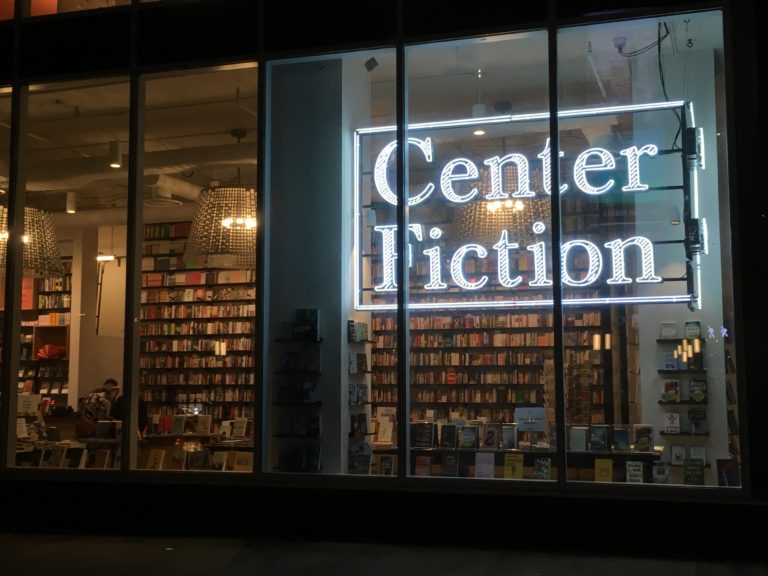 The new building is located at 15 Lafayette Ave., kitty-corner to BAM and next door to the Mark Morris Dance Group. Photos courtesy of the Center for Fiction

A nearly 200-year-old New York cultural institution has landed at a new location in Fort Greene.

The Center for Fiction is now open in one of the borough’s richest cultural corridors, adjacent to the Mark Morris Dance Group and kitty-corner from the world-famous BAM.

The center, which is the only organization in the country devoted solely to fiction writing, has operated out of Manhattan since its inception in 1821, when it was founded as a mercantile library. Its new home is at 15 Lafayette Ave., inside a three-story, 17,500-square-foot building with floor-to-ceiling-windows and elevators plastered with pages from old novels.

While the Center for Fiction is not the first bookstore in the neighborhood — the independent Greenlight Bookstore is a five-minute walk away — it also houses a cafe, reading and writing rooms, a library and a basement full of mystery novels.

Some of these perks are reserved for members only — those who pay $150 a year for a “Basic Individual Membership” will have access to the 70,000-plus titles in the lending library and the members-only reading room, a sun-filled space with towering bookshelves and framed photographs of writers from Joan Didion to Masha Gessen. The membership also provides access to the private bar and a 10 percent discount on books and events. 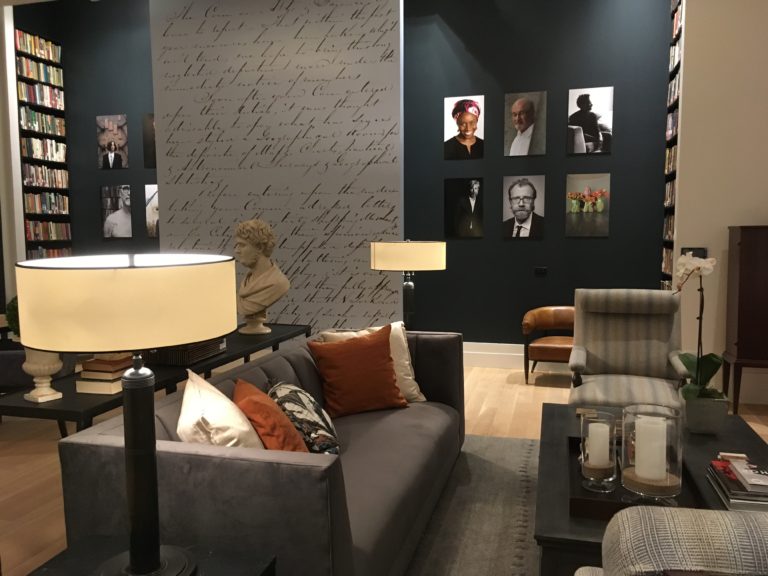 The Reading Room, open to members, is decorated with towers of books and framed portraits of writers.

After the $18 million sale of the center’s historic eight-story, white-marble Midtown space, the new Fort Greene location was “just too good to pass up,” Executive Director Noreen Tomassi told the Brooklyn Eagle’s Lore Croghan when the move was first announced in June 2015.

“Brooklyn is home to so many great writers — both well-known and emerging — and so many of our audience members already are Brooklyn residents,” Tomassi told the Eagle at the time.

She noted the stellar reputation of her new neighbors — BAM, Mark Morris Dance Center and Theatre for a New Audience among them. “It’s important to us that the literary arts be featured very prominently in that mix.”

“We think old ideas about Brooklyn as an ‘outer borough’ no longer exist,” she added. “It’s an intellectual and cultural hub in a great city.”

The Center for Fiction began as the New York Mercantile Library, with 700 books and a $150 annual budget, according to its website. It quickly expanded, developing educational programs, inviting speakers and broadening its scope to include those outside the merchant clerk community — including, in 1854, opening its doors to women.

By 1870, it boasted the largest lending library in the country, circulating an average of 1,000 books a day among nearly 13,000 members.

The 20th century did not bode well for the Mercantile Library. The creation of the New York Public Library, the beginning of the Great Depression and the realities of wartime conditions steadily chipped away at the library’s robust membership, which once totaled roughly 100,000 people.

The remedy came in the form of a rebranding. In 2001, facing the landscape of citywide libraries, the Mercantile Library found a niche for itself as a specialized home for fiction, going as far as to change its name to the Center for Fiction in 2005 under its current director, Tomassi.

Over a decade later, the center is still doubling down on that commitment. Its calendar of upcoming events contains a who’s who list of literary bigwigs.

Tomassi has even developed a bibliotherapy program called “A Novel Approach” — a clever endeavor with a cringe-inducing name.

It’s the center’s own version of a 12-step program: participants complete a 45-minute personal consultation about anything from the affair they are having to the gap in their knowledge of 19th century African-American authors. Tomassi, after brainstorming with her colleagues, returns with a personalized reading list.

The service, which costs $200, is open to members and non-members alike. 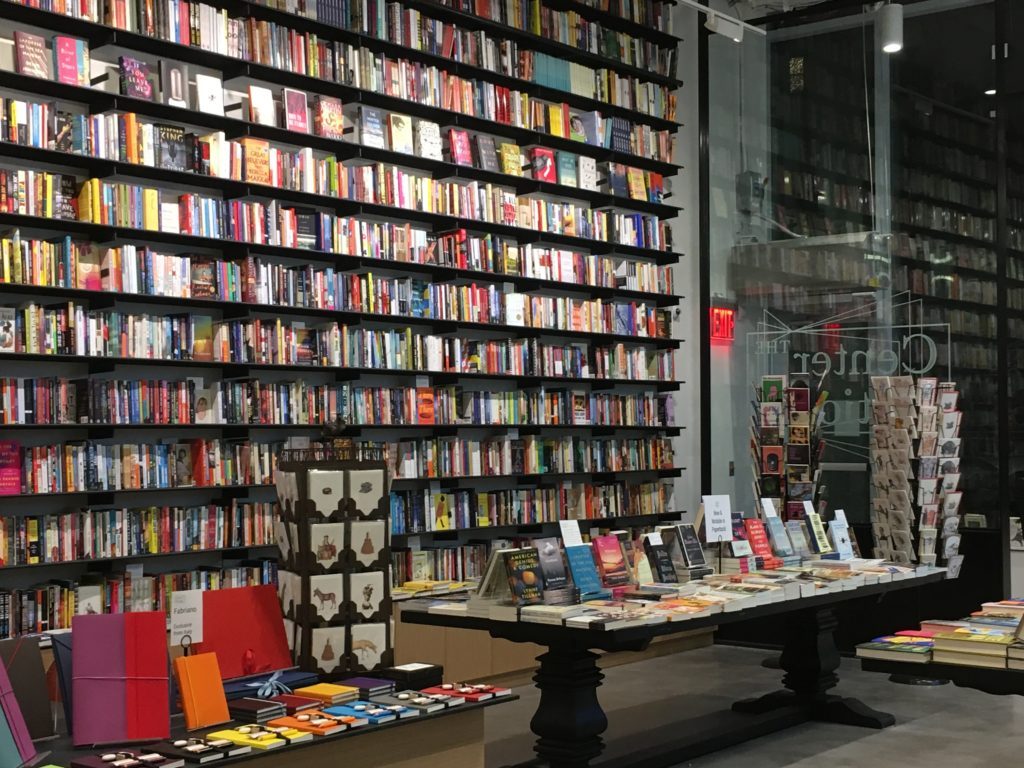 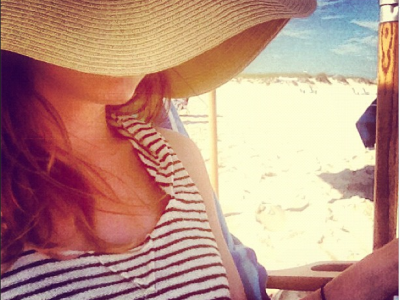 A Happy Summer Starts With Healthy Skin
Summer is right around the corner. Sunny skies, higher temperatures and beachwear await us but…

Try a Bistro Bun Egg Sandwich for Breakfast
Damascus Bakeries has the perfect breakfast recipe: These Bistro Bun egg sandwiches are the best…

Snow or shine, Brooklyn Botanic Garden is throwing a 1980's...