Review: “Nobody’s Fool: The Life and Times of Schlitzie The Pinhead”by Bill Griffith 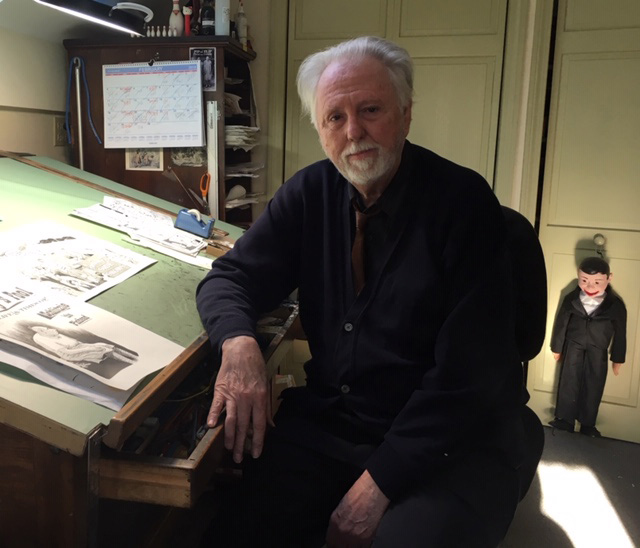 The fool of the title is a circus sideshow performer named Simon Metz — later known as Schlitzie — who was born in 1901 with a birth defect that resulted in a cone-shaped head. His lifetime fame began in 1922 at Coney Island’s Dreamland Circus Side Show, accelerated to a Hollywood film and continued in international entertainment circuits until his death in 1971. His is the complex story of a very readable graphic biography written and drawn by Bill Griffith.

At one point, the so-called “freaks” of the circus sideshow world were objects of derision; people paid money to laugh at humans different from themselves. In the 19th century, the “elephant man” captivated audiences in England, while P.T. Barnum lured fans to “strange attractions” at his American Museum.

This biography, “Nobody’s Fool” (Abrams ComicArts, 2019), elevates these “others” by focusing on Schlitzie, the most renowned and successful graduate of Coney Island’s side shows who moved on to Ringling Brothers Circus. Griffith’s research included primary sources and archives as well as interviews with people who worked with Schlitzie in an attempt to dignify his history.

Dick Zigun, president of Coney Island USA and Coney Island Museum, pointed out that “many such ‘freak’ performers only had two choices: to stay at home where neighbors made fun of them and families were ashamed of them, or to work for a living, enjoy travel and enjoy a friendly social community. Schlitzie, a world traveler, was obviously happiest performing; he was always a Star.”

The book is a work of arduous, exhaustive research by a Brooklyn-born Pratt graduate. In 1963, Griffith had encountered Schlitzie in a re-run of the sensational 1932 film “Freaks” directed by Tod Browning. Once he discovered that Schlitzie’s parents had sold him in 1909 to Stephen and Augusta Mills for a traveling sideshow, he was committed to completing the story. As a cartoonist for Real Pulp Comics, he had already created “Zippy the Pinhead,” a daily comic strip. (“Are we having fun yet?”) 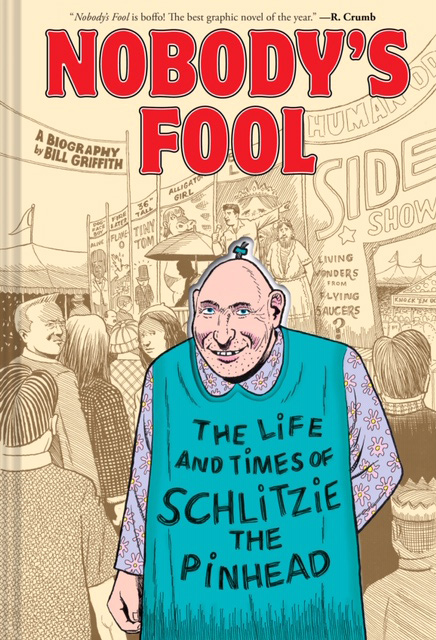 Nobody’s Fool: The Life and Times of Schlitzie the Pinhead, by Bill Griffith (c) Abrams ComicArts, 2019

The narrative time frame of the book jumps in places but the accurate illustrations and sensitivity of the author’s drawings bring the reader into the story. Barkers shocked audiences advertising Schlitzie, the performer, as a “missing link,” “the last of the Aztecs,” and “pinhead.” Audiences reacted hurling “freak,” “cretin” and “moron” at the performer.

From Dreamland, Schlitzie — a man (sometimes billed as a woman) of many names — moved to Steeplechase. Black-and-white drawings show him riding the attractions and eating at Nathan’s. In his lifetime, he was never dangerous although unfairness could make him angry, in spite of his limited vocabulary. His many friends included his managers as well as his fellow performers: a sword swallower, an armless knife thrower, and particularly Harry Earle, a little person. Some of these performers from Coney Island’s Lilliputia appeared in Munchkin Land in “The Wizard of Oz.”

In 1922, Schlitzie’s manager, Charles Zerm, took him to Venice, California, on a transcontinental train to see the “Coney Island of the West.” When they returned, his new manager, Ted Metz, booked him into the Freakatorium at Dreamland where he met ZIP, another “pinhead.” They played a musical duet, Schlitzie on piano and ZIP on violin.

The 1932 film “Freaks” featured Schlitzie in two scenes. His speech slurred, but journalist Faith Service wrote “Schlitzie was a triumph…a favorite of the MGM lot….” Critic Louella Parsons enthused that it “…tops any picture yet produced.”

Before Hollywood, Browning, the director, had worked in side shows and knew his subject matter; his prior film success was “Dracula” with Bela Lugosi, which scared the public. However, “Freaks” made audiences run out of the theater. The studio countered with ads: “What about abnormal people? They have lives, too!”

But the movie was re-edited in 1947 as an exploitation film, adding William S. Burroughs who declared: “They did not ask to be brought into the world.” By 1994, “Freaks” was re-evaluated and selected for the National Film Registry archive of cinema treasures.

Schlitzie’s new managers, George and Dodie Surtees, adopted him as legal guardians in 1936 and signed him to the Tom Mix Circus. However, his Hollywood days continued to lure him. In 1940, Schlitzie appeared in another film role with Chester Morris in “Meet Boston Blackie,” where he supposedly came from Afghanistan. 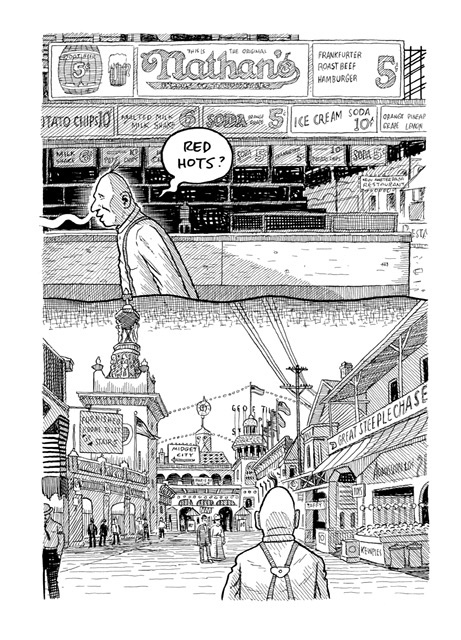 Nobody’s Fool: The Life and Times of Schlitzie the Pinhead, by Bill Griffith (c) Abrams ComicArts, 2019

Then attitudes changed. “Born different” performers were judged “wise fools” and then dupes of the promoters. In the 1960s, while Schlitzie performed on a program with the Beach Boys, police officials, citing a 19th century law, closed down the sideshow. Mexican-Americans in LA had objected to Schlitzie’s “Aztec” title. No longer were the performers permitted to perform. Sideshow acts now focused on snake charmers, knife throwers and flame eaters. Schlitzie sailed for Hawaii.

In 1965, George Surtees, died leaving Schlitzie alone and committed to the Los Angeles Hospital. Then he was discovered and rescued by a friend, Bill Unks, a sword swallower. Unks helped him return to the circuit in 1967 playing in Toronto, Santa Fe and Bloomsburg, Pennsylvania. Then, back with a former manager, he appeared at the LA Memorial Sports Arena with Ed Sullivan in 1969. A year later, Schlitzie retired and moved to Santa Monica Boulevard, hanging out in MacArthur Park and speaking Spanish.

Schlitzie died from bronchial pneumonia at Fountain View Convalescent Home in Los Angeles in 1971 and is buried in Queen of Heaven Cemetery in Rowland Heights, California. “Nobody’s Fool” has a drawing of his headstone.

Griffith’s appendix contains a list of sources. The book features a die-cutout cover of Schlitzie.

R. Crumb declared the book “BOFFO!” a word of praise used by Schlitzie. “Best graphic novel of the year…we’re all pinheads and freaks!” he added. 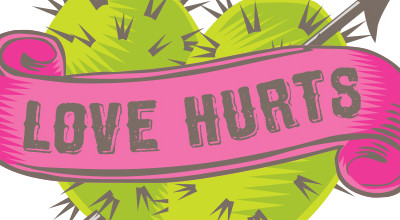 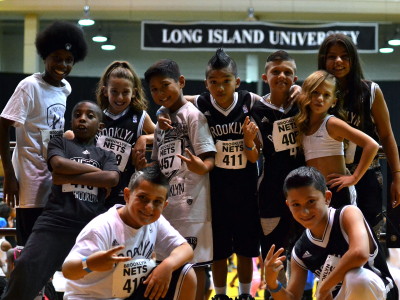 Downtown Brooklyn: Brooklyn Nets Kids Dance Team Auditions
Give us a Pitbull song and a martini on a Saturday night and you bet… 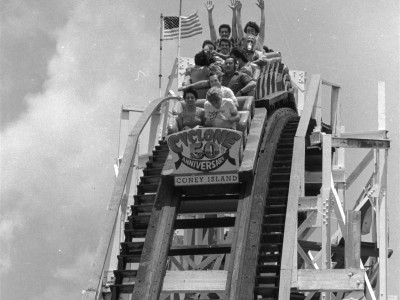 Top 5 Things to do at Coney Island This Summer
Summertime is in full swing, temperatures are rising and the desire to sink your toes…

An Inviting Atmosphere at Indian Spice

Take Your Senses on an Indian Getaway at Tikka Grill