It is the largest art parade in the nation and the largest event of the year in Coney Island. The Mermaid Parade is a unique celebration of ancient mythology mixed with honky-tonk seaside ritual that attracts hundreds of thousands of visitors to the amusement district. 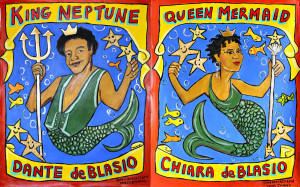 Dante and Chiara de Blasio will serve as King Neptune and Queen Mermaid and will be wheeled through the parade in an antique wicker Boardwalk Rolling Chair that dates back to 1923.

The official after-party will take place immediately following the parade at MCU Park, home to the Brooklyn Cyclones.

The parade will be held on Saturday, June 21st at 1pm.